A path to recovery: Shelly’s story

As an advocate for women who face issues with addictions, Shelly is an inspiration, because she’s walked the talk. Five years ago, she kicked her addictions with drugs and alcohol to go back to school and rebuild her life. 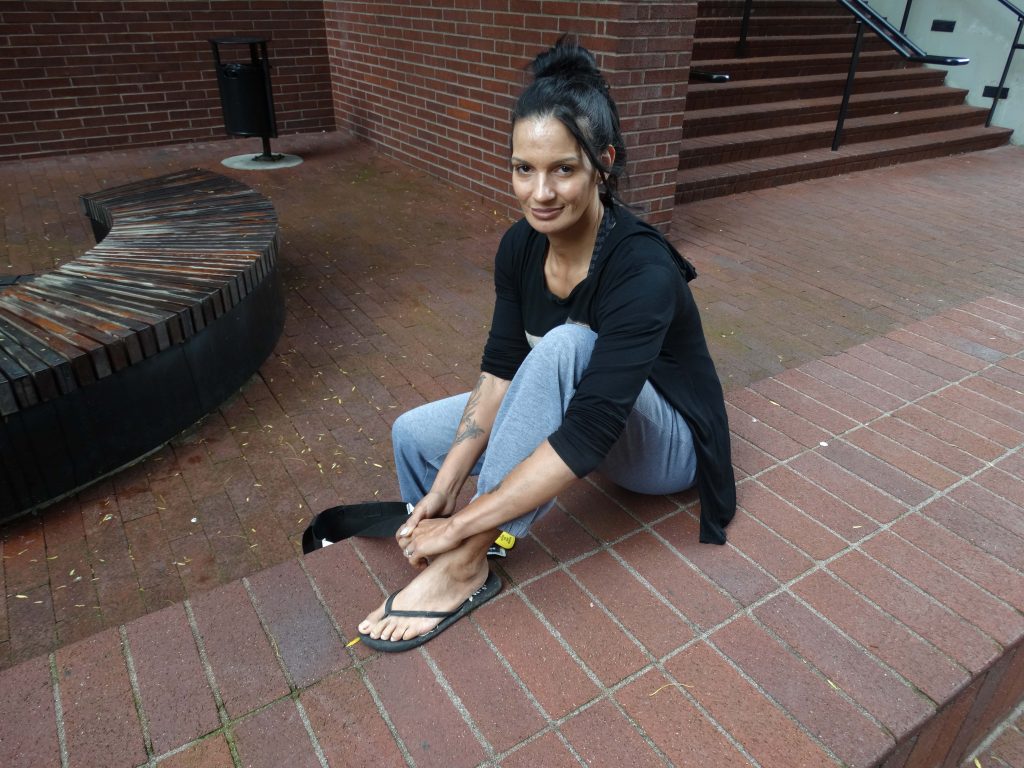 Having lived in foster care, to dealing with sexual trauma from a young age and addiction issues as a young adult, then becoming homeless and subsequently living in single room occupancy hotels for many years, she has pushed through many struggles to find her place in the world.

By the age of six, Shelly had been placed in 26 different foster homes. She lived in a home for Aboriginal children with 18 other kids for many years, all of whom had experienced their own share of trauma.

Through those early years she experienced a great deal of abuse but also found her escape through physical exercise such as running, soccer, cross country and track and field, which fed her soul. She really excelled at athletics and, in her late teens she was asked to participate in the BC Summer Olympics three times in a row for volleyball and track and field.

When she ‘aged out of foster care’ at 19 and had to start supporting herself, she started to fill the void and anguish of the past with drugs and alcohol. She sold sex to support herself financially for many years. She felt successful for a while, but over the years, she found it harder and harder to keep up the lifestyle.

In 2010, Shelly hit rock bottom – she was only 108 pounds, her body a complete wreck and jaundiced, and she had no teeth. At the time she didn’t have any veins on her body that were soft enough to inject heroin, her preferred drug at the time. As Shelly puts it, if she couldn’t have her drug of choice how she wanted it, then she might as well either die or make a change. She chose change.

Shelly had learned about a treatment centre for people with addiction issues while staying at the Rainier Hotel, a low-barrier supportive housing building managed by PHS Community Services Society. After her detox, she went to Onsite, which is located upstairs from Insite (Vancouver’s safe injection site.) “They gave me the reason to get up in the morning and provided positive reinforcement. I wasn’t ready to be clean at first, but I wasn’t willing to be entrenched on the street either. After my first visit, the seed had been planted and so I returned.”

During this time, she was introduced to her soul mate, whom she married and has been with for five years. She also loves to travel, and does so regularly for work and pleasure. She even saved up, on her own, to go to Thailand for surgery to repair the damage to her body, which had been falling apart over the years. She also slowly returned to running. At first she would go out for 5 minutes, then 10 minutes, and eventually she made it up to the point where she can now run full marathons. As she put it, “It’s the place I meet God. It’s my centre and it grounds me.”

“We do a lot of case planning, and meeting women where they are at, but we don’t leave them there. The harm reduction model was good for the 1990s and early 2000s, because there was a need to meet people where they were at, but now it’s about listening to where people are at and moving them forward so that they can be the experts in their own lives.”

Her experience working with vulnerable women started when she was a sponsor during her early years of recovery at Narcotics Anonymous and Alcoholics Anonymous.  Here she would see the unparalleled value of one woman helping the other. It didn’t only keep them moving forward, but also kept her moving forward.  As she put it, they were saving her life just as much as she was helping them.

Shelly knows she wouldn’t be where she is without the champions in her life. She thanks all the incredible service providers that helped her on the path to recovery and living an independent life, including the Lookout Society, Keys Foundation, and South Fraser Community Services Society.

As far as her future goals, they’re still as ambitious as ever. Shelly and her husband are in the midst of gathering a down payment to purchase their first home. She plans to return to Thailand one day. Life is pretty good.