Zahra and Silvia are two single mothers living in YWCA housing who found the support needed to provide a better life for their daughters. 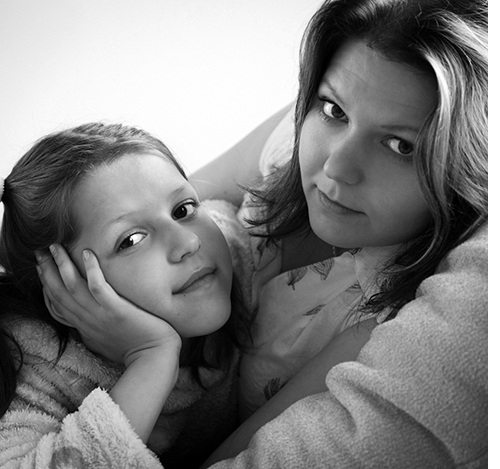 Walking into YWCA Como Lake Gardens, you enter a warm, family friendly apartment building. With a common room full of toys, a large play area and well-kept communal garden, it is the kind of housing any mother would want to live in with her child. For the women and children living in this building, Como Lake Gardens has provided more than just a home. Long term, family-focused supported housing has been a saving grace for 30 single mothers, and a way to secure a stable future for their children.

Violence and poverty are the main causes of homelessness for women and children in Canada. On any given night, 7,350 women are staying in women’s shelters. Silvia and Zahra are two women now living at Como Lake Gardens who found themselves in this situation. They are both new immigrants, single moms who fled abusive relationships and ended up homeless.

A former engineer from the Middle East, Zahra is a sweet, soft-spoken woman. After moving to Canada, Zahra’s husband became controlling and abusive. With no family, few friends and a weak command of English, she was left with few options. Zahra moved with her 5 year-old daughter into shelter, then into transition housing, and finally spent all of her income on a one-bedroom apartment. Desperate for a stable home for her daughter, she was overjoyed when her application for long-term supportive housing was approved.

Without the stress of having to worry about having a stable home, she is now able to focus on finding employment and making a plan for her future. With the support of YWCA staff and other residents, Zahra has improved her English to a Grade 12 level and is training to be a graphic designer. “When I separated from my ex, I was really alone. I didn’t know anyone to ask for help, and it was very stressful for us,” said Zahra. “After I moved here, I felt hopeful about my future. I hope I can improve myself, get a good job and help other people in this situation.”

Like Zahra, Silvia is another woman who found help at YWCA Como Lake Gardens. She is bright and funny, with a wide smile and welcoming nature. After fleeing an abusive marriage, Silvia’s ex-husband rescinded sponsorship of her application for permanent residence status. Caught without status in Canada, but unable to go back to her country of origin with her toddler without facing kidnapping charges, Silvia had no way to work or access financial assistance through the government. She applied for permanent residence on humanitarian grounds, but was told it could be up to two years before she would have status.

With no home, no job and no way to get assistance, Silvia and her daughter stayed with friends and in short-term transition housing until they were able to move into second stage transitional housing at YWCA’s Munroe House (and eventually into Como Lake Gardens). When asked where she would be without her current housing, Silvia said “Maybe other transition housing or I would be homeless. Munroe House could only let me stay for so long, other people needed it too. I don’t even want to think about it. It’s so scary.”

The YWCA found that there were a number of women in similar circumstances to Silvia’s. The agency was able to successfully advocate for a change in provincial income assistance regulations. Now, as long as women have applied for permanent residence on humanitarian grounds, have left an abusive relationship, are the sole applicant, have at least one dependent child who is Canadian, and have a family court order or arrangement that prohibits them from leaving the country, they can access social assistance while waiting for their permanent residence. This support and advocacy by the YWCA has helped Silvia directly, and will give future women the needed resources to leave an abusive relationship and find safe, stable housing for themselves and their children.

Connecting with the YWCA led Silvia and her now 5 year-old daughter to housing where they receive tailored support including food programs, employment resources, children’s activities and help with everything from advocacy to wider community services. Family-focused supportive housing helps women get housed, stay housed and provides stability for the next generation.

More than one in five households led by single mothers live in poverty. For a low-income single mom, finding safe, affordable housing is the first step in creating a better future for her family. The wait for stable housing can take up to two years and more housing is needed. Like Como Lake Gardens, YWCA Cause We Care House offers supportive housing for 21 single moms and their children. YWCA Cause We Care House will give a chance to women like Zahra and Silvia, by giving them a home and the support to dream about their future.

About YWCA Cause We Care House

YWCA Cause We Care House is a 21 unit supportive housing project for single mothers and their children who are homeless or at risk of homelessness. Partners include the YWCA Metro Vancouver, City of Vancouver, Vancouver Public Library, Cause We Care Foundation, Streetohome Foundation and the Ismaili Council of BC. Located at 720 – 730 East Hastings, this project is part of the Downtown Eastside/Strathcona Library Branch.