Through the kindness of strangers: Kris’s story 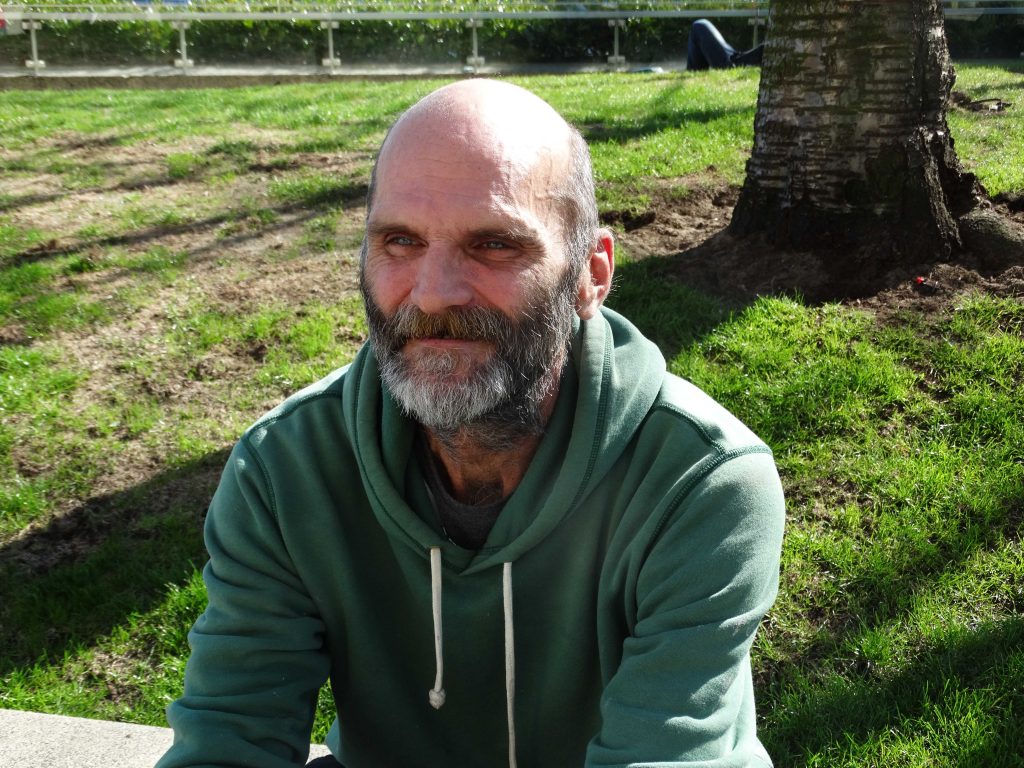 When he was just 13 years old, Kris went down to the kitchen to find a letter with his father’s name on it. When he opened it, he slowly realized it was in his mother’s handwriting. She was telling her husband that she was leaving him and their three children. One week later, his father died in a car crash. Kris was devastated.

These two major events would be the touchstones of Kris’s life.

When he was just 15 years old, he checked himself into the London Psychiatric Hospital because of depression. After that, he was in and out of prison more than 20 times throughout his adult life. Now, in his 50s, he has faced his demons and he is living in stable housing, working with a jewellery maker, and has become a local success story for turning his life around.

His epiphany came when he was panhandling in Downtown Vancouver. One day when someone on the street had been rude to him, a woman came to his defence. After many visits and encouraging comments, she came to be known to Kris as the ‘Holt Renfrew Lady’, because she worked down the street at the clothing store. After that he started to gain a little bit of courage and things began to change. As Kris put it, “She sparked something in me that there were choices to be made and that I had to start making the right ones. I couldn’t let go of her faith in me.”

The Holt Renfrew Lady encouraged Kris to start writing in a journal. Writing helped him unleash his inner conflict and gave him a means to open up about his feelings and thoughts.

He knew that if he wanted to continue to write, he had to move from the shelter he was living in to a more private accommodation. He wanted to move to The Avalon, a supportive housing building, but he had his hesitations.

“I walked by so many times thinking, ‘they’ll never take me’, until I had this ‘George Costanza’ moment – if everything I believed in before was wrong, I’ve got to do the exact opposite. So I went in and they filled the paper work and I got a room.”

Soon after he gave up panhandling to work as a Megaphone Magazine vendor on the corner of Dunsmuir and Seymour.  Vendors can purchase the magazine for 75 cents, and charge $2 to make a profit. This gave Kris the courage to write his first story for Megaphone – and to his surprise it was published!

For six months Kris locked himself up in his room at The Avalon to write. “Everything I was trying to hide from the world I emptied onto paper.” The changes were happening quickly. He knew that if he left his room to go out to the street, he might use crack. But here, he could keep his circle small and his distractions to a minimum.

But, slowly, he began connecting with people and keeping less to himself.  Every Wednesday evening The Avalon had a family night for guests. Eventually, Kris would start attending the family nights and push himself to make small talk. After a while he opened up completely.  As he puts it, “That’s where I found my voice.”

During Christmas 2013, a man who had walked by Kris almost every single day for two years and never said a word bought several magazines. After about six months, he asked Kris to come up to his jewellery shop and offered him a job. He didn’t make a lot of demands but simply said “Come as often as you like.”

At his job, Kris cleans and makes the alloy to harden the gold. He wants to learn how to mould it as well and learn all facets of the jewellery making business. He is surprised at how, while it is difficult for him to trust himself, this man has trusted him to work in his shop.

Work has given him a stability he didn’t have before, “I like having somewhere to go every day and being able to plan and budget for the future.” He’s saving up for a trip to go back east to visit a brother and sister he hasn’t seen in more than two decades.

“I’m happier than I’ve been my whole life,” says Kris. “I feel confident and successful. And, you know, if life throws me a curve ball, I’m confident I’m going to make the right choices now.”